Theoretical leaders: The Yes/No Leader – So easy a bum on a smartphone can be CEO

22 Oct Theoretical leaders: The Yes/No Leader – So easy a bum on a smartphone can be CEO

Posted at 17:33h in Uncategorized by Adam Highfill 0 Comments
2 Likes

In this series we will discuss theoretical leaders. These extreme type of leaders likely do not exist, but we are here to hypothesize what it would be like if they did. First up, the Yes/No leader.

Recently we noticed a certain homeless gentleman that has been hanging out near the Treeveo offices. He never asks for money, but he is always intensely involved with his most valuable possession…iPhone. I joked with Jeroen that he was probably a billionaire managing his enterprise from an iPhone (and stealing free McDonalds wifi) because he likes to people-watch in Placa Catalunya. 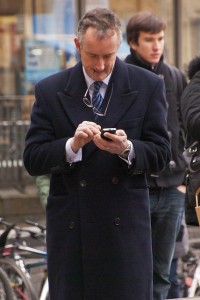 Then a light bulb came on. Managing from this position would be very difficult, unless you only had to send short messages to your team. Like a Yes or a No. We looked at each other and thought “hmmm.” Bums are not the only ones on their phones. We see managers every week on their smartphones in the airport, on the metro, and out to lunch. We even find ourselves exchanging emails en-route to the gym or on weekend excursions.

A 2010 survey done by Forbes and Google found that “smartphones are a critical part of the executive’s arsenal of devices, second only to laptop PCs. And while computers are still their most important devices for locating and filtering business information, within three years smartphones and Internet-enabled tablets could be their equal” (Forbes).*

For this reason, is there a way to simplify communication? What if emails up the command chain could only pose yes and no questions? What if managers only answered emails with yes or no, no matter what? It could completely change the way we get work done. Or it could change nothing at all.

Yes/No: How it would work

Suppose you presented a sophisticated, well-strategized thought to your manager during a project via email:

Attached are my thoughts about X. I included some projections, and recommendations to improve this process for the next go round. Should we go ahead with this solution? - David

A simple yes, or a simple no. This can be one of the most frustrating responses when we go searching for answers. David posed a yes or no question. His supervisor replied with only his conclusion about going forward with the solution: No. This forces David back to the drawing board. And only after a few round of yes/no responses can he seek detailed counsel and direction from the leader.

Let´s take a look at the benefits and challenges this theoretical leader represents. Could it work?

No: challenges of the Yes/No leader

When faced with something as vague as a yes or no, there is no room for feedback. No suggestion of where to go from here. It could make some feel alone in the wilderness with a broken compass. And let´s be honest…no one likes to be told that they are wrong. “Why is it wrong? Just tell me what you want so I can get it done and move on.”

“No” lacks flowering expression, elaborate approval, or constructive discussion. It doesn’t allow for push-back or provide any idea of a new trajectory.

If the answer is yes, it remains unclear what the deciding factors were. It is always helpful to know what is good about the work, so it can be reproduced in the future or borrowed for other processes.

A simple yes or no could produce frustration between a team or individual and their leader. But what could potentially take place during this process would be interesting to explore.

Yes: Advantages of the Yes/No leader

A yes/no leader can become a faster and more efficient person managing a stronger more capable team. Think about how much time a manager spends dosey doeing with his task groups by email about what is good or bad, approved or denied. 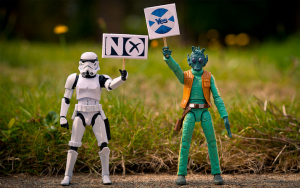 Setting up meeting and awaiting phone calls also cost time. Even providing detailed alternatives, and doing half the work on a project that has already been delegated. The yes/no proposition cuts out all of this. The leader either approves or disapproves of what has been proposed. And it’s up to the team to recreate a better solution.

This is what it does give: Freedom. The simplicity of these 2-3 letters creates space for creativity and constructive thought. This forces people to thoroughly script-out  and clearly think-through their ideas. What’s the fun in being told what you’ve done wrong? You learn more when you have to figure it out yourself.

Ultimately, good leadership and corporate discipleship is about creating more leaders. The yes/no process can also create leaders by allowing individuals to rise to the occasion without leaning too heavily on their manager. We don’t want to create a group of followers – task checker who do what exactly we say. We want to develop cognitive folks. We want to empower out-of-the-box thinking when confronted with the brick wall of “no.”

Is this theory something even a bum on the stoop – stealing McDonald’s wifi on his iPhone – could use? Here is our brief hypothesis about the yes/no manager.

We think the Yes/No manager can work. Though vague communication has the potential to lack substance and direction, here is our where our focus lies: What could happen during a few rounds of non-specific approval or disapproval? This could create an environment where individuals catch their own mistakes more quickly, and build new creative solutions.

The yes/no function would only work through a couple rounds of email before some face time is necessary. After all, you are a team. Everyone is learning. And stuff needs to get done. However, empowering a team of people to think critically while making the leader more productive is an interesting thought. It remains a hypothesis, but it could be an interesting experiment to try with your team to see if they grow, and if productivity increases or decreases.

What do you think? To leaders- would this be something you would be interested in trying as a leader? To team members- would this frustrate you or empower you?

If you would like to know more about us, stop by Treeveo.com.

*Forbes. “The Untethered Executive: Business Information in the Age of Mobility.” (2010). Forbes, in Association with Google. Web. <http://images.forbes.com/forbesinsights/StudyPDFs/The_Untethered_Executive.pdf>